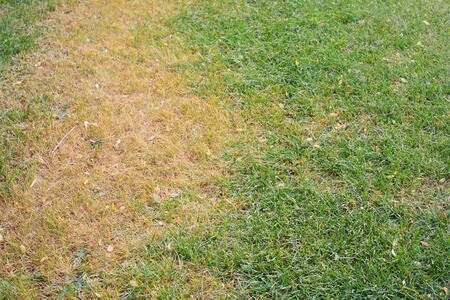 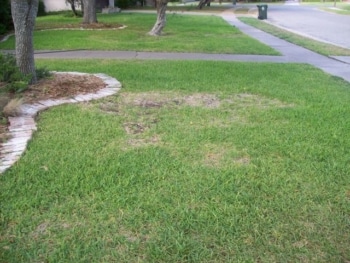 “Lawn disease” is a convenient term that’s used to describe a variety of issues. But it’s important to know exactly what you’re dealing with so you can apply the most effective treatment.

The truth is, fungus may be the biggest culprit of them all when it comes to truly damaging lawn intruders. Sure, there are some major players to contend with- like crabgrass, for instance. But fungus, as a category, offers a whole host of diseases that are often well-established before they become visible.

While “large patch” and “brown patch” diseases are sometimes referenced interchangeably, they are actually different pathogens with slightly different features. They both come from the family Rhizoctonia solani, but they are separate species, and tend to affect different grass types.

The main visual distinction between large patch and brown patch is actually implied in their names. Both diseases create large and unsightly patches of ailing grass in your lawn.

With large patch fungus, the affected area will have a ring of yellow or orange grass blades that remain somewhat upright. But with brown patch fungus, the blades will wilt and flatten, eventually turning brown. They will also have a dark “smoke ring” along the perimeter, that is sometimes only noticeable in early morning.

Both diseases can also be mistaken with insect-related issues, such as excessive grub worms. However, there are ways to differentiate between the two pretty easily, which we will explore in the section about how these fungi affect your lawn.

Another simple distinction lies in which turfgrass you’ve chosen for your lawn. Large patch affects common warm-season grasses, such as Zoysia grass and St. Augustine grass. These grass breeds are widely popular in the North Texas area, meaning a mystery fungus in your lawn is more likely to be large patch rather than brown patch.

Brown patch fungus affects cool-season grassescool-season grasses, and is most prolific with grass types such as Ryegrass, Bluegrass, and Fescues. However, that doesn’t mean your North Texas lawn is completely safe from brown grass fungus.

Both types of fungus have a similar disease process when it comes to how they damage your lawn. They infect your grass as the level of the stolon, where the blades come together above the root system. This means the thatch, roots, stems, and blades all end up with the infection if it goes on long enough.

This is exactly why treating fungus preventively is critical. Just like some invasive grass species, large patch and brown patch fungus can be off and running- completely out of control- by the time it’s truly noticeable in your lawn.

In a moment, we will discuss effective measures you can take to stay ahead of the curve.

If you’re not sure whether you’re dealing with fungus or insect larvae, simply pull up a few blades. Both problems create spots of dying and discolored grass, but there are a few differences.

With a fungal infection, the grass will pull up easily, and you will be able to see brown lesions along the lower portion of the stems. Additionally, the blades will remain intact even as they rot and become discolored. Conversely, grass that is being eaten by insect larvae will literally look ragged and chewed up.

Here is where it is most important to draw a few distinctions between large patch fungus versus brown patch fungus. Preventive measure between the two are quite similar, but their preferred growth environments are a bit different.

The fungus that causes large patch disease tends to spread in temperatures remain below 70 degrees Fahrenheit. This means it can crop up in early spring, or later on during the fall when the air begins to cool.

As with all lawn care issues, the best way to problem-solve is to take a look at what the disease prefers, and work to prevent those conditions from developing. Large patch prefers areas with excess shade, moisture, and nitrogen. Additionally, it develops in the thatch layer of your grass bed.

Taking a que from those conditions, it is easy to conclude the following:

Fungicides are effective in treating large patch and brown patch infections, but not nearly so much once the infection has begun to spread. Using a fungicide preventively keeps you a step ahead of the disease process. This means it should be applied before temperatures exceed 70 in the spring, and after they’ve dropped to 70 in the fall. 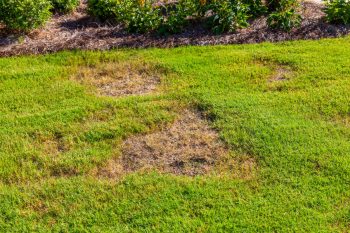 This foe favors many of the same conditions as brown patch fungus. Therefore, much of the same preventive measures will be employed to combat brown patch disease, such as reducing excess water, nitrogen, thatch, and shade.

However, brown patch fungus really loves warm weather. It becomes active at about 65 degrees Fahrenheit, and will spread more fervently when the daily temperatures are averaging 80-85 degrees.

High humidity can also accelerate its growth, which makes any established infection especially threatening in our humid North Texas springs and summers. 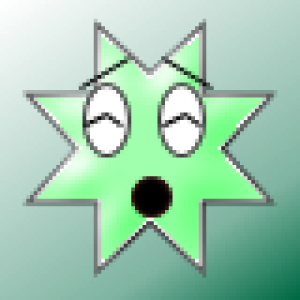 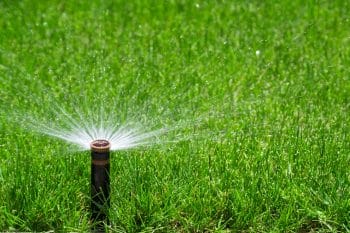 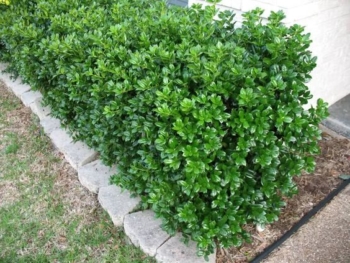